Theme: Talking Science Fiction – Its Popularity and its Social Value – Part One

Benjamin Phillps began his love for reading at the young age of 11. He began creating fictional characters and writing short stories in high school, finding he held the same love and interest in writing fiction as in music.

Alan Black has been writing novels since 1997 when he started Eye on The Prize. It took him two years to complete the novel although it wouldn’t be edited and published until 2001. He has gotten faster since then completing a recent manuscript in three weeks.

J.D. Scott is the organizing member of Abba’s Writers in Phoenix, Arizona and a part of the team at A Book’s Mind as a Publishing Consultant. She is the author of the widely-read “Anahera Daniels Series.” She recently published the second book in the series, titled, The Emergence of Anahera Daniels.

This Week’s Message:Science fiction is a genre of fiction dealing with imaginative content such as futuristic settings, futuristic science and technology, space travel, time travel, parallel universes, and extraterrestrial life. Sci-Fi, as it is often called, explores the potential consequences of scientific and other innovations, and has been called a “literature of ideas.”

Preview our page at
http://www.blogtalkradio.com/richerlife/2015/05/08/talking-science-fiction–its-popularity-and-its-social-value–part-one 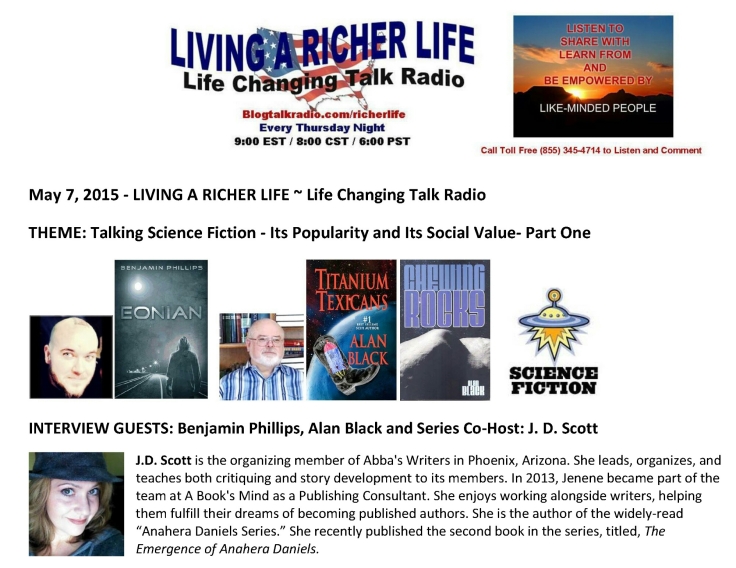